49,091 O'Connell members around the world 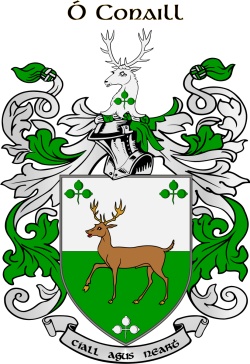 Design your own O'Connell Family Crest

Ó Conaill- anglicised O Connell, Connell, the root is personal name Conall, which means 'strong as a wolf'. This is an ancient Celtic name; it exists also in Welsh as Cynvall, from ancient British 'Cunoval(os). Many of Ireland's legendary heroes were named Conall, for example Conall Cernach of Ulster and Conall Corc of Munster. Conall Gulban, the founder of the Cineál Chonaill, gave his name to Tír Chonaill (Tirconnel).

To be distinguished from Mac Dhomhnaill, anglicised as MacDonnell and MacConnell in cos Antrim, Down and Tyrone, which refers to the Scottish Gaelic clan. Inevitably there must be cases where the 'Mac' was elided, and some confusion as a result.

The great families of the name were located in Co Derry, a branch of the Orghiallagh (Oriel) in Tír Chiaráin (Tirkeeran), in Co Galway of the Uí Mhaine, in Co Kerry, where they were anciently chiefs of the Magh Ó gCoinchin. This latter family were dispossessed by the Ó Donnchadha clan in the 11th century, and reappear as hereditary castellans of the Mac Cárthaigh dynasty of Baile Uí Cairbre (Ballycarbery) near Cahirciveen in West Kerry.

In the great Cromwellian 'Expugntio' the O Connells of Ballycarbery were uprooted and 'transpalnted to west Clare: 'to Hell or Connacht' was the watchword of the zealous British Calvinists vis-a-vis the great Catholic families of Ireland. Their chief at the time was Muirgheas Ó Conaill. Many scions of this line served as officers in La Brigade Irlandaise of France, among whom was Count Daniel O' Connell, uncle of the great Daniel O'Connell, 'the Liberator' (1775-1847).

Looking at the 1659 'Census', undertaken by William Petty, the English surveyor of Ireland for the Commonwealth, the name appears as a 'Principal Irish Name' in the original counties, as specified above, as well as others, e.g.:

Co Galway is, unfortunately, missing from the 'Census'.

Co Kerry
Barony of Trughanacht, O Connell, 15 families; Maquinihy, O Connell, 9 families; Iveragh Barony, three Connells are named as landowners: Daniell Connell of Dromod parish, Dermod Connell of Ballenskealigg and Charles Connell of Killimleegh. From these entries it would appear that not all O Connell landowners were transplanted from Kerry.

Two Famous O Connells (from so many!)

Daniel O'Connell, The Liberator (175-1847) born near Cahirciveen, Co Kerry. He campaigned for Catholic Emancipation through peaceful mass action. During the 19th century in 'the most civilized country in the world' catholics were not allowed to be representatives of their people and sit in the U.K. Parliament (a catholic still can't be a U.K. Head of State in 2012). He also campaigned, through mass rallies etc., for repeal of the infamous Act of Union (1800).

Dáithí Ó Conaill (1938-1991) born in Cork. His uncle, Michael O'Sullivan, was a member of the 1st Cork Brigade IRA in the 1920-21 War of Independence. O'Sullivan was bayoneted to death whilst a prisoner by British Forces in 1921. Ó Conaill joined the IRA at the age of 17. He later became disilusioned with what later became known as the Official IRA, and left with others to form the Provisional IRA in 1969/70, which was committed to a physical response to the British presence in the 6 counties of 'Northern Ireland'. He served on the Provisionals' Army Council and was Director of Publicity. He was active in political campaigns of Sinn Féin in the early 80s, but left with Ruarí Ó Brádaigh to form the more hard-line Republican Sinn Féin in 1986.

Tell us about any famous O'Connell (or surname variant) you think we should add here. We will get our genealogists to check them out and add them to the list. Thanks!

Join the conversation with the O'Connell tribe

Areas of Origin for O'Connell

Write an email address and click 'Invite' to share this page with more members of the O'Connell tribe.

Discover where the O'Connell Family members live around the world

Show off the O'Connell Family Crest…