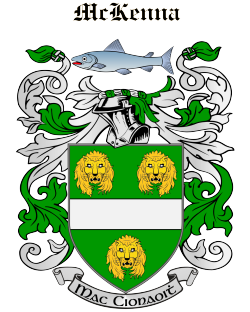 Design your own MCKENNA Family Crest

Mac Cionaoith, also Mac Cionaodha- anglicised MacKenna, MacKenny, Kenny, earlier as M'Kinna &c. meaning 'son of Cineadh', a name which, according to Ó Corráin/Maguire, may well be a borrowing into Old Irish from Pictish. The meaning is unknown. As a first name its modern form is Kenneth.

The main family were of the Southern Uí Néill and were chieftains of the territory of Trough in the north of the modern County Monaghan. It may well be, that like other septs of the Southern Uí Néill, Ó Scolaidhe (Scully), Ó Ciardha (Carey) &c., they spread into other parts of Ireland after the Norman invasions of the 12th century. There was also a family in Co Roscommon who were 'clients' of the O Connors. According to Woulfe ('Sloinnte Gaedheal is Gall', 1923) the surname is also to be found in the Munster counties of Kerry, Cork and Limerick.

In William Petty's 1659 'Census' of Ireland (which it must be stressed is both incomplete and erratic), the following names are found in those listed by Petty as 'Principal Irish Names':

Co Monaghan has no occurrences of the name in the 'Census'.

Co Roscommon
Roscommon Barony, McKeny & Kenny, 11 families; Athlone Barony, Keny & Kenny, 6 families. There may be some confusion here with Ó Cionaoith, a fairly powerful and numerous sept of Co Roscommon, whose name would be etymologically identical to that of McKenna.

Co Kerry has no occurrences of the name in the 'Census'.

No obvious examples found in the 'Census' for Co Limerick.

By the mid 19th century, and Griffith's 'Primary Valuation' of households in Ireland, the name McKenna is to be found mostly in counties Monaghan 758, Tyrone 366, Derry 215, Louth 128 and Armagh 123. The total McKenna households were 2192.

In the same document McKenny is principally found in counties Donegal 64, Down 43 and Tyrone 42. Total McKenny is 285.

The Registrar General's 'Special Report...' (1894) on surname distribution, based on birth registrations in 1890, sows most occurrences of McKenna in counties Antrim, Monaghan, Tyrone, Kerry and Armagh.

Bernard J. McKenna (1843-1903) who served as Mayor of his hometown, Pittsburgh, from 1893-1896, became a Labor Union Leader in the iron industry after returning home from the Civil War.

My Great Great Grandfather Peter Mckenna was born around 1835 he was a farmer and lived in Aughnacloy County Tyrone around 1883, i don't know his wife name, I only know of his son my Great Grandfather Hugh mckenna who Married Ellen Quinn in Aughnacloy In the year 1883 her fathers name was John Quinn he was also a farmer, I have hit a brick wall I can't seem to find anything else out

My great great great grandfather was Patrick McKenna, I don't know whom he married or where he was born. He had at least one child - Peter born c1833. Peter married Margaret Cassidy from Co Meath in 1869, they were living in Drogheda and they had at least 8 children. They were Patrick, James, William, Thomas, John, Peter, Elizabeth & Mary Jane. Patrick, James and William went to Iowa, John went to Iowa/Wisconsin, he died in a railroad accident and his wife and children came back to Drogheda. Thomas died aged 5, Peter died aged 20. Lizzie married John Matthews in Drogheda and stayed there. Mary Jane went to Scotland and was a teacher, she never married. John was my great great grandfather, he married Ellen Hogg in 1901 in Drogheda, they had 2 children before John was killed - Peter (my grandfather) and Margaret.

My Great-Grandfather, William Henry McKenna, lived in Mayo and moved to Tyrrellspass, Westmeath around 1890. He was more commonly known by his second name, Henry, instead of William. My father told me, many years ago, that our ancestors originally came from Monaghan, but being too young to care I never thought to ask how he knew this. Would be grateful if anyone has information regarding McKennas from any of those areas.

Looking for any information on McKenna of Lobinstown, Meath My Great grandfather Bernard McKenna was born in Lobinstown, Meath, Ireland on 30 Nov 1835. He was the son of John McKENNA and Ann (HUGHES) McKenna. Mother name may be Marry Ann (Hughes) McKenna. Bernard and his parents and Bernards Grandmother Margaret McKenna emigrated to USA arriving on May 1, 1847 along with Bernards siblings John (Johah) age 6, Margaret age 4, Elizabeth age 2.

Areas of Origin for MCKENNA

Write an email address and click 'Invite' to share this page with more members of the MCKENNA tribe.

Discover where the MCKENNA Family members live around the world

Show off the MCKENNA Family Crest…