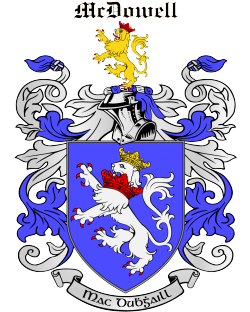 Design your own MCDOWELL Family Crest

Recorded in many forms including MacDowall, MacDowell, McDowell, MacDowal, MacDoual, McDugald, McDougal, McDuall, McDill, McDool, and McCool, this is a surname of Scottish origins, which is also well recorded in Ireland. It is a development of the pre 10th century Old Gaelic "MacDubhghaill" from the male given name "Dubhghall", composed of the elements "dubh", meaning black or dark, and "gall", a stranger. It is said that this was frequently used as a nickname for Scandinavian-Viikings, and in particular to distinguish the darker-haired Danes from fair-haired Norwegians. The clan are descended from Dugall, the eldest son of Somerled of the Isles, a family described by the late Dr...

I am researching my McDowell family history but have really hit a brick wall. My Grandfather was born in Belfast in 1904. His father was James McDowell. Rumour has it that James was born on the Isle of Man around 1884, but I haven’t been able to confirm this. I think James had a brother named Charles, but am unsure. Their father was named James as well, I am pretty sure. If anyone can point me in a promising direction that would be wonderful.

James Edward McDowell came to America with Olga McDowell James was 1 year old. Born 1894 when they immigrated the ship line was listed as 99, and he married Mary Grace Nemecek Jan. 22 1918. They had two children Grace Catherine, and James E. II

(Part 1 of 3) The McDowell name has a long history in Ireland, but now DNA and some recorded history says its origin is from the south-west region of the Emerald Island. The McDowell story [dominated by DNA tribal marker R1b-L513, Subgroup O2] can trace their beginnings to what is now County Kerry from 50 BCE. Perhaps the journey begins with the Clanna Dedad; Deda, son of Sen or Deda Mac Sin. The McDowell surname origin is possibly a branch of what will become the Dáirine [R1b-L513] who are found in south Ireland around 300 CE.

(Part 2 of 3) According to research, the Dáirine will join with the Dál Riata of north-east Ireland and invade Scotland around 500 CE. But how could this be? Recent discoveries from DNA testing are unlocking the migration patterns of Celtic tribes as late as 800 CE to 1200 CE. The McDowell story begins in pre-history Ireland but many of his descendants will then move to Kintyre, Scotland where they and other R1b-L513 members will form the Dalriada. This line and many of his kin will then travel to Brittany, France during the Dark Ages.

(Part 3 of 3) Discover their newly found untold story and how forgotten texts bring their story back to life. From the ebook, “The Tribe Within” learn how DNA unfolds this amazing tale and if you look in the right places, how history narrates this evidence. There is another written account of their story, but it is camouflaged in smoke and myth – it will become the tales of King Arthur. Come follow in the footsteps of Deda Mac Sin and visit https://www.smashwords.com/books/view/401207

I am seeking any decendant of Judge W W McDowell of Memphis Tn. he lived during the Civil War..My grandmother was his great grandaughter and is buried 4 graves from the judge at Elmwood Cemetery in Memphis...I would like to trace her family line Ewing too...Her name was Pauline Ewing Murdock Adele

Lady Monet: Judge William Wallace McDowell is listed in Hon. John Hugh McDowell's The History Of the McDowell's and Connections (C.B. Johnston & Co. 1918). His picture appears on page 86 and his family line, including his descendents, is discussed on pages 87-89. Send me an email.

Areas of Origin for MCDOWELL

Write an email address and click 'Invite' to share this page with more members of the MCDOWELL tribe.

Discover where the MCDOWELL Family members live around the world

Show off the MCDOWELL Family Crest…