8,808 KEHOE members around the world

Our TEDx talk about family gatherings 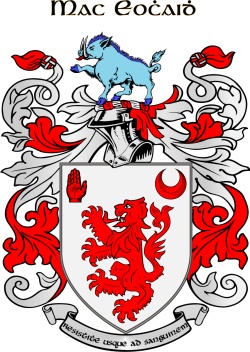 Design your own KEHOE Family Crest

Kehoe/Keogh is one of several versions of the Irish name "Mac Eochaidh" which translates as ?son of Eochaidh?, a personal name based on each ?horse?. In Ireland the Kehoe version is used most often in and around County Wexford while Keogh is more common throughout the rest of the country. There is also a similar Danish surname, Ke?gh.

Though not of Wexford origin, Kehoe is a numerous name inthe county where it is distinguished by its spelling from the Keoph of Kildare and Wicklow. The early MacKeoghs were of the same stock as the O'Byrnes with whom they migrated in early medieval times from north Kildare to Co. Wicklow and later spread to Co. Wexford.

They were hereditary bards to the leading O'Byrne families. The Four Masters describe Maolmuire MacKeogh as chief professor of poetry in Leinster in 1534, and several fine poets of the name are cited by Douglas Hyde.

Hore in his Chronicles of Enniscorthy mentions a Treacy Kehoe being made a freeman of that town in 1734, likewise John Kehoe, of Coolree, Templeshambo, in 1774.

A Wexford Kehoe who continued the family's ancient tradition as poets was Padraig Kehoe, of Glencarrig, Enniscorthy, who died in 1959. He was prominent in the Gaelic revival movement and was elected to Dail Eireann in 1933, later becoming a Senator.

In an oration at his burial, his life-long friend and comrade, Seamus Doyle, described him as a 'great and true Irishman whose soul was filled with the love of his native land and was alight with the flame of patriotism.

Padraig Kehoe was associated with Arthur Griffith in launching the Sinn Fein movement and took a leading part in the Irish struggle for independence in Wexford. In the early years of this century he wrote the one-act play 'When Wexford Rose' which was produced in the Abbey Theatre, Dublin, in 1914. His poems included ‘Ireland Over All’,'For God and Ireland' and 'Sweet Slaneyside'. He wrote extensively under the name 'Hy Kinsella'

His son, Padge Kehoe, was one of the outstanding Wexford hurlers during the county's golden years of the 1950s, winning All-Ireland medals in 1955, '56 and '60. He also played for Leinster in the Railway Cup series and on the Ireland teams that played the Combined Universities. Andy Kehoe, late of Ballyhoo, Screen (par. of Castlebridge) was a member of the Wexford team that won Wexford's first All-Irelard hurling title in 1910. Another star of Gaelic games in the 1940s and '50s was Paddy Kehoe from Gusserane (par. of Ballycullane), Christy Kehoe of Enniscorthy was a more recent star.

Micheal Kehoe, former principal of Glynn National School, who died in January, 1977, was one of the outstanding Wexfordmen of his time.

He dedicated his life to the promotion of the Gaelic cause in sport, language and culture. He represented the Wexford County Board of the Gaelic Athletic Association (G.A.A.) on the Leinster and Central Councils for more than fifty years.

In 1969 he was elected President of the Association and made a number of trips to the United States to promote Gaelic games there. He was a keen student of Wexford history, especially of the '98 period, and was chief organiser of the '98 commemorations in 1938 and 1948. He was a valued member of the Ui Ceinnselaigh Historical Society and a life member of the Royal Society of Antiquaries of Ireland.

His son, Michael Kehoe, is a former Chief Executive of the Irish Farmers Association. Another son is Rev. Lory Kehoe, Parish Priest of Clonard (Wexford). The present Parish Priest of Davidstown is Rev. Patrick Canon Kehoe, a native of Blackwater.

Matthew Keogh, a retired British army officer, with a distinguished record, joined the United Irishman and became rebel governor of Wexford town during the '98 rebellion. He was hanged on Wexford bridge on June 25, 1798, his body being thrown into the River Slaney and his head placed upon the Courthouse. At his trial Lord Kingsborough and Colonel le Hunte testified to his humanity.

Matthew Keogh was born of a Protestant family and rose from private 10 ensign during the American War. After retiring from military service he became a Justice of the Peace but was removed from the bench in 1796 for his revolutionary sympathies. He lived in George St., Wexford.

Edward Kehoe. Believed born 1829 Oct in Ireland possibly Co Clare. Have been told the family farm has always been in Kehoe hands even today. Want to know specifics of farm location, if still exits and what family we connect to there.

My great grandfather was Patrick Kehoe from Ireland then went to Nova Scotia DOB 1839. Married Mary Macdonald DOB 1841 (PEI), they had John H., Edward William (11/1875) grandfather, Mary Bella. Edward moved to NYC and Married Madaline (lena, Magdalena) Bauer, who had Catherine, John, Lawrence, Vincent (my father 1/8/1923), Joseph, Marie and Clarra and others. Vincent after serving in WWII married my mother Sonia Mazur. If there is anyone that could help with the ancestry would be great. Sincerely Lisa Kehoe

My Kehoe line originated Co. Wexford and relocated to Canada 1825.  There is a Facebook Group for KEHOE Research with lots of information to help find your Kehoe ancestors.

Write an email address and click 'Invite' to share this page with more members of the KEHOE tribe.

Discover where the KEHOE Family members live around the world

Show off the KEHOE Family Crest…